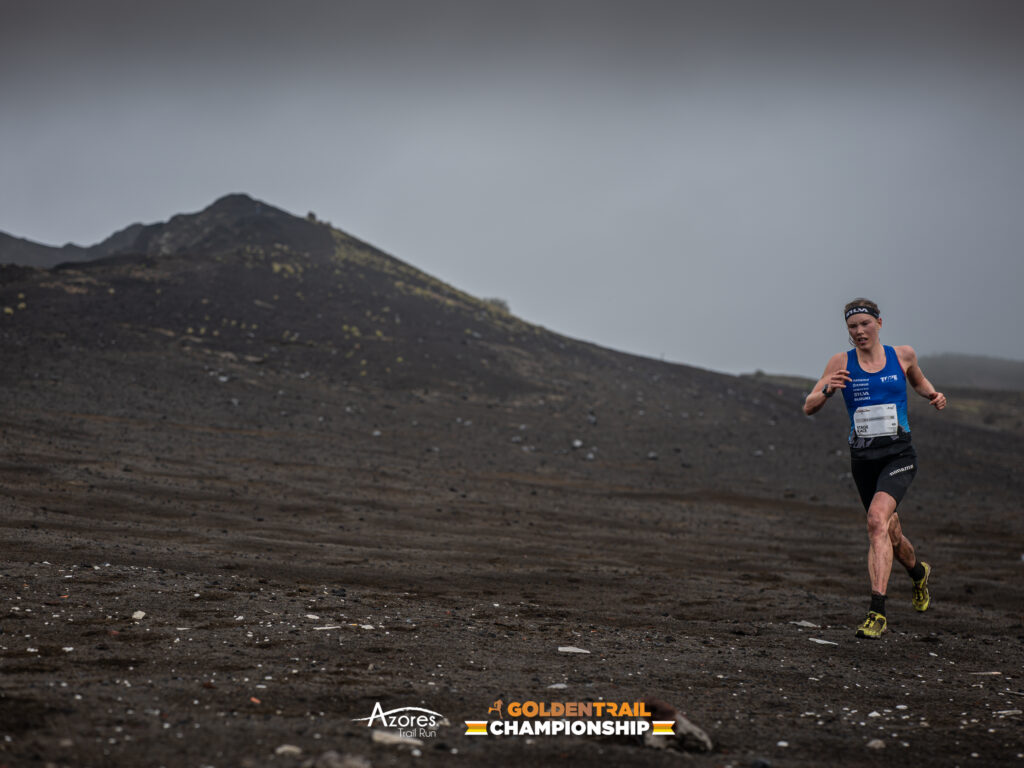 What a contrast from the Prologue! It was a day for wading in deep mud, slipping’n’sliding in technical mayhem. Between grappling on hands and knees in the jungle and clinging to the edge of the great Caldera being swept sideways by the pummelling wind.

The two orienteering specialists, the Frenchman Frédéric Tranchand (Team Nvii) and the Swedish Tove Alexandersson (Team Icebug), won the first stage of the Golden Trail Championship in the Azores, taking away the esteemed yellow bib for the start of stage 2 tomorrow.

Down at the little Port of Salão the athletes started day 1 in the throes of battering west winds and driving rain. In front of them lay a series of muddy paths to the top of the caldera, well the word “path” may have a different meaning here in the Azores, “It was a real mess!” laughed Thibaut Baronian (Team Salomon) as he arrived. “We had to climb up through the forest where we ran up a ditch” Frédéric Tranchand exclaimed. The French orienteering specialist wears the bloody scars from this technical course and dire conditions. Although nothing stopped him from winning this first stage hands down in front of all the trail running specialists! “The climb through the forest was really tough, I was really struggling, but I knew there would be others who would struggle more because I’m used to orienteering in this kind of terrain. So that motivated me and I hung in there. I’m really happy with my result”, crossing the finish line 30 seconds in front of Polish Bart Przedwojewski (Team Salomon) and closely followed by Moroccan Elhousine Elazzaoui (Team Salomon) coming in 3rd.

Victory comes at a price!

The women’s line-up also saw an orienteering specialist cross the finish line first. The Swedish Tove Alexandersson (Team Icebug) won by almost 7 minutes ahead of the Swiss Maude Mathys (Salomon). “The terrain was very varied with very technical parts, and mud! It was perfect for me!” she explained, whilst lying on the ground in the mud after just past the finish line with her ankle in the air and an ice-pack strapped around it. “Yeah, I twisted my ankle… I don’t know how bad it is. We’ll try and take care of it and see how the body behaves over the next few days” She seemed non-plussed. Behind her Maude Mathys (Team Salomon) arrives in second place grinning wildly under her mask. But more importantly she wins the uphill and sprint segments. “I am so happy! I didn’t really have a plan, I wasn’t aiming for anything, but I saw on the uphill I wasn’t being followed so I went for the uphill segment. I knew it would be tough with Tove who’s a rocket in the downhill down and who loves technical terrain”. Blandine L’Hirondel completes the podium for third place.

A fight to the top

At only 2.7km from the start today’s uphill segment began, 2.4km with an elevation gain of 353m. Both the men and women battled fast and hard, Rémi Bonnet (Team Salomon) laughed about it afterwards. “All that I know is that I got that uphill! I just went hell for leather deliberately, and when I saw that the guys were hanging on, I went double-full gaz!” After the segment the Swiss later let his rivals pass to finish in 11th position.

The women’s battle was won by Maude Mathys (Team Salomon) who seized the red bib. She put her head down into the wind and pounded it out realising she was alone up front, with the Frenchwoman Blandine L’Hirondel and American Rachel Drake (Team Nike Trail) almost one minute behind her.

A technical downhill nightmare for some!

“It was a massacre!” exhales the French legend Ludovic Pommeret (Team Hoka One One), exhausted by the technical trails on this first stage, especially the downhill. In this section it was the Norwegian Anders Kjærevik (Team Bergen Running) who was 22 seconds faster than the Frenchman Théo Détienne (Team Salomon) who was also chasing after the blue bib.

No surprise with the women, the Swedish Tove Alexandersson (Team Icebug) was the fastest, but as she already has the yellow bib under her belt she must leave the blue bib to her runner-up, the Slovenian Ana Cufer (Team Salomon). Just 45 seconds behind her the Norwegian Eli Ann Dvergsdal took third.

To sprint or not to sprint!

Today’s sprint was a gritty 1.7km with 32m vertical elevation, with plenty of twists and turns to trip your rhythm. The men’s green bib holder, French Théo Détienne (Team Salomon) bust his gut to try and hold on to it. But the Spaniard Andreu Blanes Reig was 3 seconds faster, gaining the prized bib, and the Polish Bart Przedwojewski (Team Salomon) was 4 seconds later to take third position.

The women’s sprint had Maude Mathys (Team Salomon) in the lead, already the red bib winner, followed by Tove Alexandersson (Team Icebug), the overall winner, and as you are only allowed one segment bib, this enabled Anaïs Sabrié (Team Matryx) to collect this prized green bib. If these two women manage to keep their respective bib colours on the stages to come, Anaïs Sabrié (Team Matryx) must defend her green bib from Blandine L’Hirondel who is 12 seconds behind and the Spaniard Gisela Carrion (La Sportiva).

The fun has just begun! Let’s see what Day 2 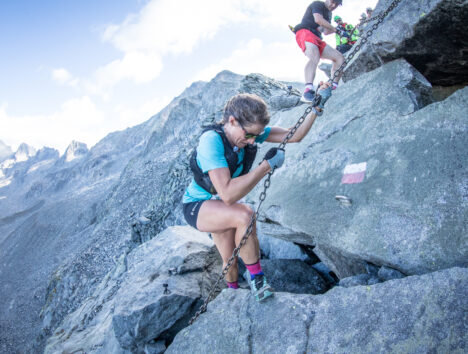 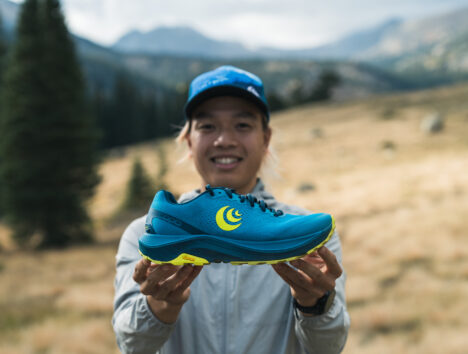 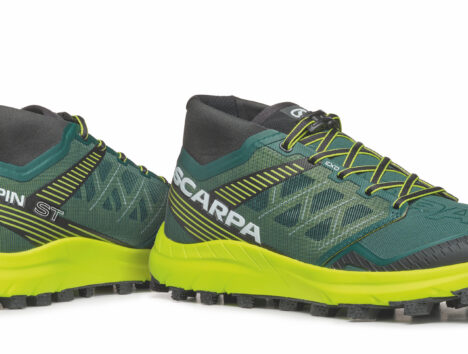 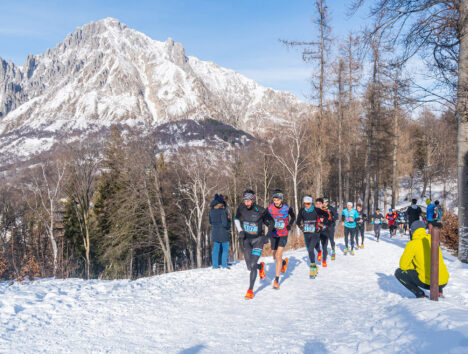