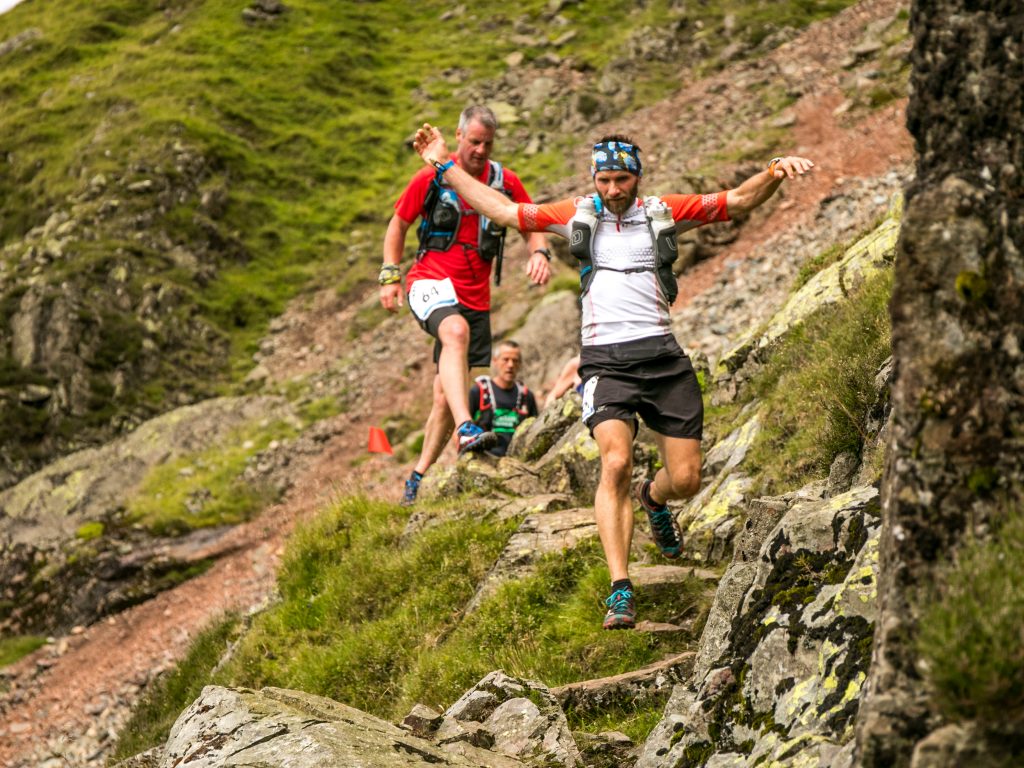 “I don’t mean to freak anyone out,” says Lakes Sky Ultra (LSU) race director Charlie Sproson at the pre-race briefing. “But, in places, this is an extremely technical course.”

“Please exercise Sound Mountain Judgement at all times,” he warns. “That means, if you don’t feel safe, connect with other people. If you still don’t feel safe, don’t go past the next check-point. Come down off the course. You need to make that decision.”

Skyrunning races have been in the UK for four years. These aren’t trail races, ultra races or even ‘fell’ (mountain) races. One way to understand them is running meets alpinism or rock climbing. Charlie prefers, “like Fell Running on acid.”

LSU is a 56km course with 4,500m of ascent, in England’s most spectacular natural playground, the Lake District National Park, awarded UNESCO World Heritage status just a week before we visit. Rather than avoiding knife-edge ridges and any gnarly, rocky, hyper-rugged, un-runnable terrain, this route actively seeks it out. At times, the course’s little red flags – a signal more commonly a sign of danger or to stop, here it means ‘come this way if you dare’ – are erected on a rocky ridge, running parallel with an invitingly runnable trail. “I don’t want you on those trails,” grins Charlie. “This is a sky race.” The runners titter nervously. 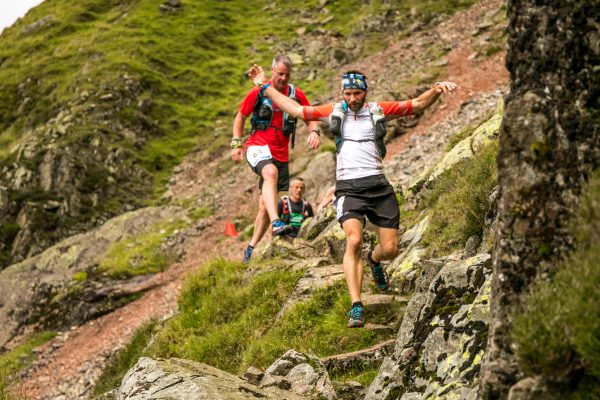 It’s a tough course, but three sections are particularly notorious. “Striding Edge is really steep and exposed ground, a knife-edge ridge. It’s hand on rock, again. You’ll want three points of contact on rock as much as possible. Use your hands. Use your climbing skills.”

“There’s a hand-on-hand, rope descent from Eagle Crag,” says Charlie to the room of runners so silent you could hear a mouse fart. “Take care with your footing there. A helmet is advisable.

Pinnacle Ridge is another roped section and the most notorious of all. “I don’t want to alarm anyone,” says Charlie, “but it’s very steep, so there’s a rope. We have extra safety staff there. We have more mountain professionals on the course than ever before. We want to make sure you’re safe.”

“I’m not going to lie, the climb to Pinnacle Ridge climb is a real bastard,” says Jason Millward who placed fourth in 2017. “It’s just relentless and so steep it feels vertical. Halfway up I thought it would never end. And by the time I reached Pinnacle Ridge itself, my heart and legs felt like they were going to explode.”

This is a vetted race. The competitors all declared that they’re experienced in the mountains and comfortable on rocks, scrambling and traversing technical terrain. Some of them carry helmets, as they’ve been encouraged to do. All runners are fitted with a GPS tracker, so friends and family can watch live online. But more pressingly, so safety staff can see if someone’s getting into trouble.

The trackers have an SOS button. “If you’re feeling a bit low, lonely or lost, don’t press the SOS button,” warned Charlie. “A helicopter may come. So only use it in a real emergency. If you are in real trouble though, please do use it.”

It’s not just the runners at risk either. “The cut-offs are hard. That’s partly safety for runners, but partly for safety of staff too. Last year the marshals got really cold waiting up on the mountain tops.”

It’s not all doom and gloom though. There’s a fantastic atmosphere around the race. Cow bells clang. At times a banging drum can be heard through the mist. Spectators have made it to the most inhospitable places. Runners have made it here for today’s race – and tomorrow’s little sister race, the inaugural Scafell Sky Race – from the US, South Africa, Australia, New Zealand, France, Norway, Slovakia, Italy, Germany, Sweden, Poland, Netherlands, Ireland and all around the UK. 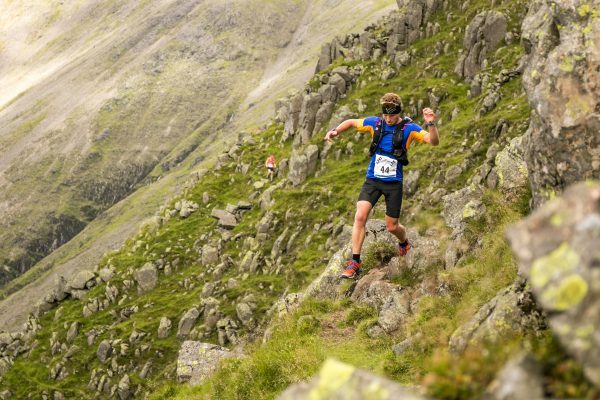 Knife-edge ridges and exposed, Grade 3 scrambles, combined with difficult Lake District conditions made for a very tough race, testing experienced runners to the limits of fitness and technical ability. “It’s not a race for the fainthearted,” said Jason. “But it’s one of the most rewarding to finish. The course is tough and tests every aspect of trail/fell/mountain running to the limit. Despite their best efforts the mountains did not beat me today. I can’t recommend it enough. I loved it and will be back next year without a doubt.

“At the finish line my legs just gave way beneath me. I was knackered. It’s certainly one tough race. But it’s absolutely awesome. It’s extreme. It’s gnarly. It’s hardcore. For once a race that lived up to the organiser’s hype.”

“The toughest section for me was the slog from Haweswater to Kirkstone [near the end]. I was on my own and the conditions made it feel very isolated. I could have been anywhere. The headwind and driving rain made forward progress difficult. I’ve never been so pleased to  hear the sound of a car engine through the clag [originally an UK Air Force term, adopted by locals, from the acronym Cloud Low Aircraft Grounded, circa 2nd World War] before.”

The most fun bit was Pinnacle Ridge, he says. “I felt out of my confront zone, due to fatigue. But the scramble was so much fun, I wanted to go back for another go. Technical and challenging but within most people’s ability if they spend time in the mountains.”

Sunday’s Scafell Sky Race (SSR), 40km and 2,800m of ascent, was a very different affair. Glorious sunshine blessed the course over England’s highest point, Scafell Pike, designed to be technical and challenging, but as an introduction to skyrunning.

Unlike LSU, SSR entries are not vetted and the course, created also by Sproson, is designed to showcase the best of the Lakes.

From the quiet village of Seathwaite runners climbed past the milk-white Sour Milk Gill waterfalls, up the hanging Gillercomb Valley to the summit of Green Gable (801m).

Technical singletrack led past the Napes Needle (where rock climbing originated, in the 1880s), then a classic, technical ascent of the highest mountain in England, Scafell Pike (978m). Boulder fields, scree and more thrilling singletrack led to a feed station in the beautiful valley of Langdale. A torturous climb back up the fells followed, alongside a huge, serene lake and irresistible ridge-top running all the way to the finish in the village of Ambleside.

“That was the gnarliest and most technical races I’ve ever done,” said Australia’s, Salomon athlete Lucy Bartholomew, who also placed first at Ultra-Trail Australia (100K) this year. “It was tougher than [notorious Norwegian skyrace] Tromsø. I am so proud to have pushed myself outside my comfort zone to win!”

The Lakes Sky Ultra and the Scafell Sky race return to the Lake District in 2018. For more information visit www.lakesskyultra.uk and the race’s Facebook pages. 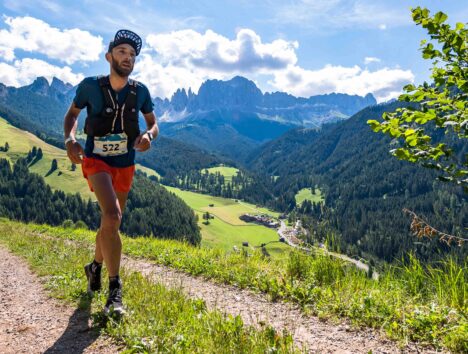 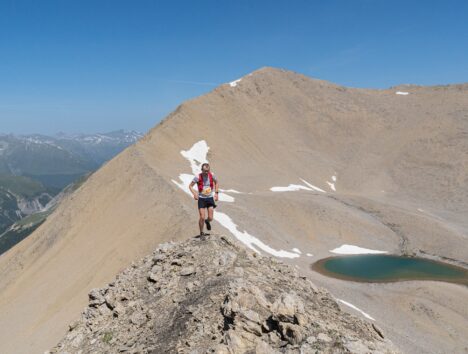 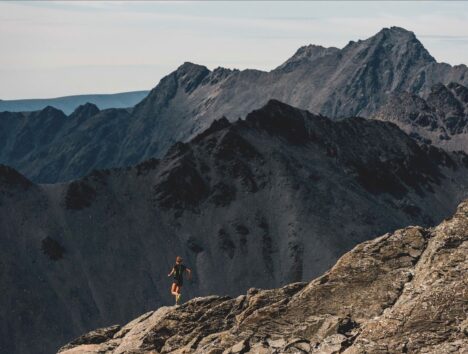 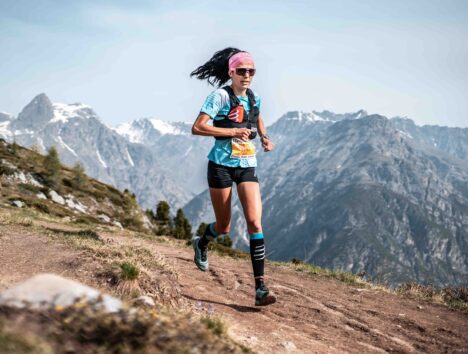